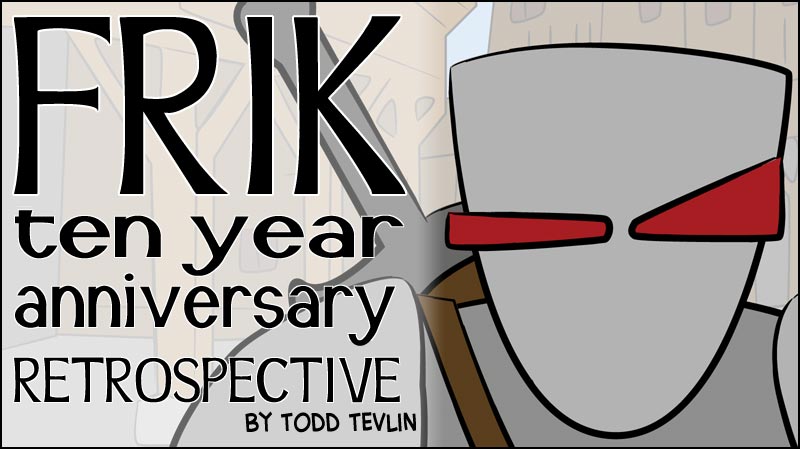 This month marks the ten year anniversary of my very first comic, FRIK. Yes, TEN! It doesn’t feel like it was that long ago, but here we are. At the time, I was a stay at home dad to a rambunctious three year old, and comic making was the LAST thing on my mind. Who knew five years after that point it would lead me into a career teaching children’s drawing classes…

FRIK is about a medieval warrior who’s forced to get a job at a medieval fast food restaurant. The concept was perfectly simply, and the contrast between the main character and his surroundings brought much organic comedy. Also, a lot of sub-surface analogs with myself at that time went into the main character, adding another layer. As great as all that is, I can’t take any credit for it. This whole thing was literally thrown in my lap from God.

The entire comic’s concept popped into my head at once, along with characters, setting, and story arc. POOF, in my noggin. The last time I created comics was when I was thirteen years old, and those never saw the light of day beyond my homeroom class at middle school. They were all unoriginal knockoffs of 1980s cartoons, and I eventually moved on to other artistic mediums. Honestly, I never expected to come back to creating comics, ever.

The title first started out as “FRIK’IN HELL.” I liked the play on words as Frik was literally in his own version of hell working at the restaurant. Although the comic was always geared towards 10-99 year olds, much of the humor leaned adult’ish, and this title was one element of that.

Years later I was behind a table at a comic convention and a kid wanted to look at this comic. His mom wrangled him away telling him it wasn’t for his age because of the title. That’s when I realized I shot myself in the foot by being clever. I corrected this with the anthology book that contained all four volumes and simply named it, FRIK: The Complete Series.

This started off as a web comic and came out once a week, but my goal was to always sell prints at comic conventions. Early on I made a lot of mistakes with the printed version as I was learning how to self publish. Eventually I worked out the kinks and today I’m happy with the final product. I first sold it at cons after two volumes were printed in the summer of 2012. 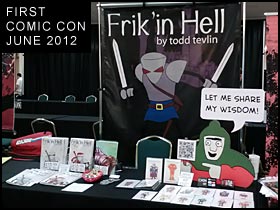 FRIK ended its run after five years and four volumes, including him leaving the restaurant and fighting ninja gnomes and goblins along with a host of other encounters. It sold well at comic conventions, and several miscellaneous pieces of FRIK merchandise still sell today at cons and in my STORE. (My “Demotivational Posters” being the most popular.)

As this comic was ending, I started working on my next, HOLES IN IT, and eventually, THE NORMLINGS. All three having completely different styles and themes, with each one challenging me in new ways in terms of storytelling and artistic ability.

In early 2015 my son was a full time student and I was trying to find my way back into the workforce. The title, “stay at home dad”, no longer applied to me. An errant thought crossed my mind, “Why not teach a comic class to kids?” I immediately dismissed it and kept looking for work. A couple weeks later my son was talking me up to his art teacher at school about me making comics, and next thing I know I get an email from her asking me to come teach all four classes of my son’s grade. (Ok God I get the hint!) 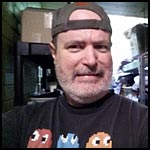 I had about two weeks to write a lesson plan for these classes, but I had ZERO teaching experience and never did anything like this before. I was a nervous wreck leading up to the classes and even more so teaching them. (Pictured: Me right before the first class waiting in the back room to be announced.) Like coming back to comic creation, teaching was also the furthest thing from my mind on God’s path for me.

After teaching those, I continued to develop the comic class. By the end of the same year I was teaching children’s comic classes around the St. Louis MO area with a more developed multi-week, KIDS COMIC WORKSHOP, series. The first few classes sold out too! Since that time, my CLASS list has expanded A LOT, and for the past year or so I can safely say that I’ve made enough money at this where I can now call it a career.

This is all due to God throwing a comic idea in my lap on a silver platter ten years ago. It should be interesting where God leads me in the next ten years. Given His track record, no doubt it will include things that were also the LAST thing on my mind. Stick around and find out!

Thanks for reading!
Todd 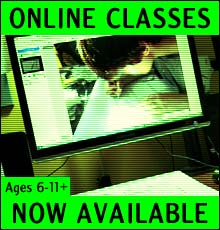 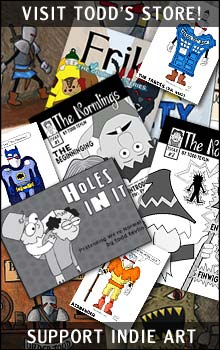